During monsoons in my province,
Fortitude wears thin,
Faces grow long, and ants file
To cracks on the wall
Next to the bottles of spices.
I know it would come again,
The gunfire of ache in my pulses
Following the thrum of rain on the roof.
A philosopher might say
The mind suggests what the mind
Only knows, so I forgive myself
For knowing one thing:
We have variations of longingness,
Those we could soon mark
On our necks and chests,
The rest of the landscapes
We have yet to conquer,
As if to say, this is how we begin.
Now all I want is to be blind
On how these could possibly end, to keep
The monsoons of the heart unfading
Like the birth of a new storm.
croaked by Bullfrog at 11:07 AM 1 comment: links to this post 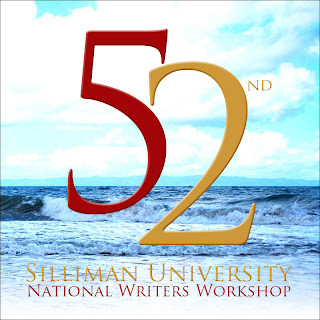 This year’s announcement requires more than the usual celebration at the nearest drinking pub. Here’s why. Just two months ago, a friend asked me to read his collection (written with much discipline over many years) before submitting it a day before the call’s deadline, and right then and there, I knew he would make it. And he did. Congratulations, Lyde. Our rare lucid moments have finally paid off.

The 52nd edition of the Silliman University National Writers Workshop is slated to start on 6 May 2013 at the Rose Lamb Sobrepeña Writers Village in Camp Look-out, Valencia, Negros Oriental.

Here are the thirteen writers from all over the Philippines who are accepted as workshop fellows:

They will be joined by special Singaporean fellows Christine Leow and Nurul Asyikin from Singapore Management University.

The workshop, which traditionally lasts for three weeks, is the oldest creative writing workshop of its kind in Asia. It was founded in 1962 by S.E.A. Write Awardee Ediberto K. Tiempo and National Artist Edith L. Tiempo, and was recently given the Tanging Parangal in the Gawad CCP Para sa Sining by the Cultural Center of the Philippines.

This year, the workshop is co-sponsored by the National Commission for Culture and the Arts, the Embassy of the United States of America in Manila, and the United Board for Christian Higher Education in Asia.

For more information about forthcoming events during the workshop, please email Workshop Coordinator Ian Rosales Casocot at silliman.cwc@gmail.com or call the Department of English and Literature at (035) 422-6002 loc. 520.

croaked by Bullfrog at 8:12 PM 4 comments: links to this post

Here’s something true: I cringe and feel sick when a curse word comes cruising into my ears.

There is a multitude of them, originating from different languages, each possibly more hilarious or vulgar than the last one you’ve heard. Like drugs they vary in degrees of potency. You’d probably get one on your way to work. Hence, there’s no need mentioning any mammalian excrement here, the F word here or someone’s mother and what she does here.

I have my fair share of them thrown at me and I can say that I am no saint in this department, as if suggesting I haven’t flung an expletive at somebody or the neighbor’s noisy dog in this lifetime. Of course, I do. I, too, fall into the ease of this play.

But not as frequently.

As frequently compared to whom? Now let’s keep that blank to avoid a strain on relationships familial, intimate and platonic.

This is my sense of self, the familiarity of my reservations. And just when I thought I was alone, an unlikely friend of mine last Saturday shared the same displeasure to cussing or cursing.

Also, the same aftereffects upon receiving or hearing one, especially when it is uncalled for: aggravation, a numbing pain in the head, and then suddenly, a strange sense of disappointment and hopelessness. Almost like a hangover.

Profanities, it seems to the two of us, are major downers.

This is not to spring myself up on the goodness scale. No one’s holy. Sometimes, dropping the bombs in cases of extreme anger are justifiable (or debatable, it depends), but during everyday conversation for the sake of being funny? For driving the point home? For enraging someone? Here are my thoughts on them.

For humor? Casual crudity could be amusing but an excess of it leaves a bad taste in the mouth. For emphasis? Curses only highlight a starving imagination or the absence of it. For retaliation? Courage comes in many forms, but firing away obscenities is not one of them, since cursing simply stresses the incapacity to talk back with sense.

In the end, what you think is funny, cool, or brave is actually the other way around: rude, cheap, and coward.

There are more horrifying things the world could open up to us, so there is no use contributing to the garbage we already have in our hands. The idea is this: the less said the better.

But that’s just me. If all forms of reasoning fail (such as this article), then I would have to keep to myself or run away from the hailstorm of vulgarity. Jumping into the bandwagon is not an option as of the moment.

So now, you can start putting in your two cents worth here. In other words, your piece of shit.

croaked by Bullfrog at 3:35 PM No comments: links to this post