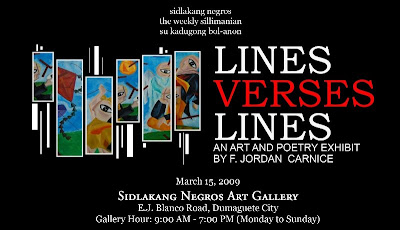 The Dumaguete National Writers Workshop is now accepting applications for the 48th National Writers’ Workshop to be held May 4-15, 2009 in Dumaguete City. This Writers Workshop is offering fifteen fellowships to promising young writers who would like a chance to hone their craft and refine their style. Fellows will be provided housing, a modest stipend, and a subsidy to partially defray costs of their transportation. To be considered, applicants should submit manuscripts in English on or before March 27, 2009 (seven to ten poems; or three to five short stories; or three to five creative non-fiction essays). Manuscripts should be submitted in hard copy and on CD, preferably in MS Word, together with a resume, a recommendation letter from a literature professor or a writer of national standing, a certification that the works are original, and two 2X2 ID pictures.
Send all applications or requests for information to Department of English and Literature, attention Prof. A.G. Soluta, Chair, Silliman University, 6200 Dumaguete City.For information, please email english@su.edu.ph. Or go to the workshop website.
_______________________________________________________________
croaked by Bullfrog at 3:41 PM No comments: links to this post 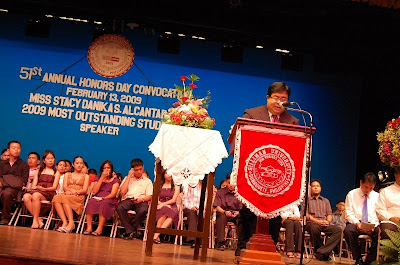 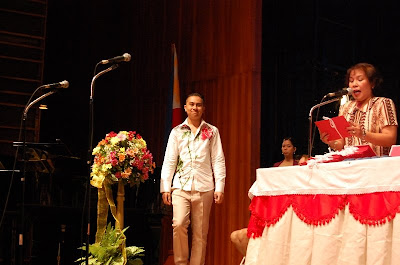 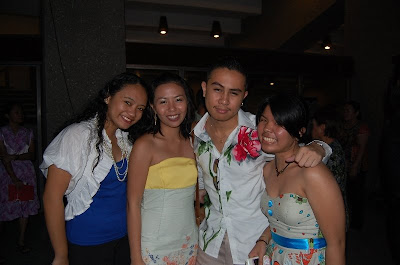 March 13, before Valentine’s Day, was honors day. Luckily, on my fourth year, I still made it to the roster of nanings. You know what a naming is? This is a kind of breed who works very hard to achieve what’s supposed to be achieved for our parents and significant others to be proud of their spent hard-earned monthly salaries. This sounds too negative but positive nevertheless.

But wait. Yesterday, I was lonely. My parents didn’t arrive. Due to weather conditions that troubled daring sea fastcrafts to be slow, my mother and sister went back to their homes in Tagbilaran and called me that they can’t come see me do the walk in the Claire Isabel McGill Luce Auditorium. Their trip was cancelled. Okay, I still have my acquaintances to cheer me up. Well, so much for my anticipation to see mum’s face, complaining about my new hairdo.

And yes, my hairdo. This is a blatant projection of narcissism but I just adore the way people stare at it. I may have a few minutes to show it off on stage (and pat SU President Ben S. Malayang at the back for an inside joke) but the cameras, whispers, cheers, and hollers love me. Eat that you boring people! 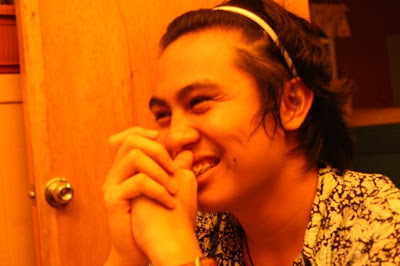 The Bullfrog says goodbye. Not to anyone in particular that you know but to his long dark locks. I bid farewell to my hair. It has been four months, trying out style after style until it is tamed by the splendor of cheap headbands. Yes, the red, black, and white ones. The classics. Though some literally cringe at its sight, I have all the pride in the world to flaunt it, parade it for all the people to see every day. Of course, the hair is everyone’s crowning glory and mine is just as precious. But why cut it? I guess it has its fifteen minutes of fame by now. And I need something new to pull off this February. Yes, something extraordinary, something bizarre. Oh, just wait and see.

croaked by Bullfrog at 3:56 PM 3 comments: links to this post

RULES OF THE CONTEST

1. The contest is open to all poets of all nationalities, age 28 and below.
2. There are three divisions in the awards:
a) Filipino b) English c) Chinese
3. An entry must consist of at least eight (8) but not more than fifteen (15) poems.
4. Authors may join all the divisions but can submit only one (1) entry in every division.
5. All entries should be original in every language and not a translation of another entry.
6. A work which has been awarded a prize in another contest is not qualified for the awards.
Published or unpublished works may be entered in the contest. If published, the date of publication should be within 2008-2009.

8. Font should be ARIAL or TIMES NEW ROMAN, and the font size should be 12.

9. Entry should be submitted with pen name only and not real name. Real name and pen name should be submitted in a separate sealed envelope together with a biodata, copy of birth certificate and a notarized declaration of originality and authenticity of authorship of the entry.

11. Entries submitted via e-mail should be an RTF (Rich Text Format) or a Word Document file and should be sent as an attachment together with the author’s biodata and copy of birth certificate and notarized certification of originality or authenticity of authorship of entry. The original copy of the notarized certification should then be sent to MMAFI thru mail. Entries submitted via e-mail should be transmitted not later than April 15, 2009.

12. Submitted copies of winning entries shall remain with and become the property of MMAFI. Copyright of the works remains with the author but the latter grants, assigns and transfers into MMAFI the right without necessity of any payment other than the prize which may have been awarded to publish any winning entry or selection or portion thereof as it may at its discretion determine; to make the work available for downloading on the Internet or other electronic medium; and /or to allow students to make copies for research or in connection with their school requirements.

13. Plagiarism is anathema to the contest and MMAFI has the right of action against the author, if it may be later on discovered that said person is not the creator or owner of the copyright to the winning work. The Foundation shall not be liable to any court action if a third party files a case against the winner who plagiarized the work of the said third party.

14. There will only be one Grand Prize winner for each division and the prize is
PhP 28,000.00 and a Julie Lluch sculpture trophy per winning entry.

15. The Board of Judges shall have the discretion not to award any prize if in its judgment no meritorious entry had been submitted.

Carnivale
(September 2003 - March 2005)
This beautiful period drama, set during the great Depression, sank deep into the never-ending battle between good and evil, all against the backdrop of a traveling carnival. It boasted the most unique set of characters we'd seen since "Twin Peaks," and some of the most confusing storytelling we'd seen since that show as well. But just because we were sometimes baffled doesn't mean it wasn't compelling TV. This ambitious, artistic series set out to unfold its complete drama over six seasons but was cut short after only two, leaving us scratching our heads even more.

- By Angel Cohn, The Best Brilliant But Cancelled Dramas of the Decade

croaked by Bullfrog at 2:25 PM No comments: links to this post