Mikhail Red’s “Birdshot” is a work of art. The film centers on 14-year-old Maya who lives with her father Diego in some undisclosed farmland. Diego’s wife died in childbirth, and he is getting old, so he tries everything he can to teach Maya the ways of living—and that includes hunting. One day, with her shaggy black dog Bala, Maya finds her way to the sanctuary. She needs to prove to herself that she could stand on her own, and this brings her to an irreversible decision that changes everything. She unknowingly shot a haribon, a Philippine Eagle that is now close to extinction due to urban developments, illegal logging, and forest burning. This is where police officer Mendoza and his rookie subordinate Domingo come in to investigate. It’s hard giving justice to its brilliance without spoiling it. Even if “Birdshot” utilizes the methods of a police procedural and the coming-of-age story, it propels forward to places that you’d never expect, to situations that would unnerve and jolt you. Red’s direction is close to perfect. He has the polish of Chito Roño, poetic flourishes of Lav Diaz, the critical sensibilities of Marilou Diaz-Abaya. The absence of the specificities of time and place gives “Birdshot” an almost mythic feel. Everything's not what it seems to be—scarecrows seem to come alive, shadowy figures lurk in corners—and this is best portrayed by how complacency and good intentions of a higher system can actually have deeper, more sinister motives. Idealistic minds could get corrupted. In one scene, John Arcilla’s Mendoza tells his partner, “Trabaho lang yan… iinom lang natin yan”, and you cannot help but think of our country’s nightmares that consume our waking moments—like the innocent 17-year-old Kian Delos Santos who was killed by police officers last August 16. As the end credits rolled, I suddenly felt all the wrong decisions this country has made, and just broke down and cried. Fiction creeping into reality is nothing new. But when the distinctions are blurred or altogether removed, when life becomes stranger than fiction, it is high time we stand up, speak out, and remedy the situation. “Birdshot” is that eagle’s cry we all need to hear.


[ photo borrowed from this site ]

croaked by Bullfrog at 5:51 PM No comments: links to this post

Jason Paul Laxamana’s “100 Tula Para Kay Stella” looks like it is the only movie in the Pista ng Pelikulang Pilipino lineup that aims to entice the rom-com crowd. I thought I would be naturally repulsed, even with its premise of love and literature, but it should be noted that it is more than that. Framed by early 2000’s college academic years, the story revolves around JC Santos’ Fidel, who has a speech impediment and who falls for the devil-may-care attitude of Bela Padilla's Stella. He begins to write poetry and plans to gift her with a compilation of his works. Although the titular 100 poems leave a lot to be desired and could’ve been a chance to showcase our country’s rich verse literature, the device works in that it mirrors the ups and downs of the plot (albeit too conveniently). Winning someone with poetry seems quaint at this day and age (it doesn’t work, trust me), a formula probably culled from old Hollywood romantic comedies, but you could really dismiss this complaint because of the chemistry of the two leads. Bela Padilla is that type of actress who can embody a character without the usual self-awareness that plagues her contemporary. In this film, she truly is Stella—pained but passionate, indecisive but headstrong—and you'll understand why JC Santos’ naive Fidel would go to great lengths to win her despite her flaws. And above all, one thing that separates this movie from the rest of the millennial love stories out there is this: Just like poetry, its emotions are honest and raw, and what we may learn from them may not necessarily be what we want to have. The truth does not only reveal; it also hurts.

croaked by Bullfrog at 1:05 PM No comments: links to this post

from eight to X 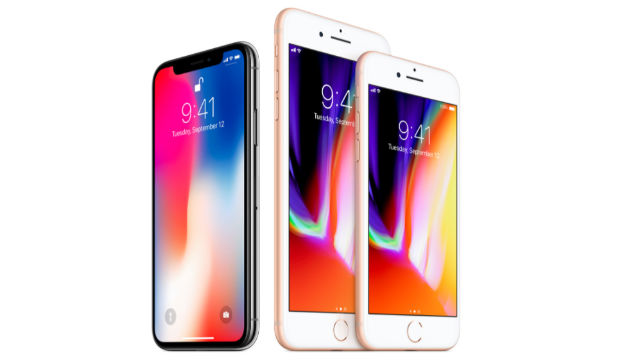 Last Wednesday, September 13, new phones from Cupertino are finally unveiled to the world. Meet the iPhone X (pronounced as iPhone “ten”) and its younger siblings the iPhone 8 and the iPhone 8 Plus.

I personally find it funny that Apple branded its latest and most advanced iPhone with the a fancy, pompous Roman numeral “X”. Obviously it is a nod to the iPhone’s 10th anniversary in the tech world, but this move just made all the Galaxy S8s, S8 Pluses, and Note 8s of Samsung this year look inferior. Which is a brilliant marketing move. If the accompanying numbers really do matter, I encourage Samsung to name their next phones with 10 to the power of 10. Or why not jump ahead to 200? You know, like, Samsung Galaxy S10 to the nth power. Or Samsung Galaxy Note200. Let the numbers war begin! But, of course, if numbers are all the craze, they have no match to Nokia 3310 or 5110.

Kidding aside, the design language of the latest iPhones has not differed that much from its previous iterations. I like it. It remains gorgeous and easy on the eyes. But looking at my iPhone 6 right now, which was first released 2014, just makes me think I am holding a relic from a distant past. It feels ancient. It has been with me for a long, long time already, and as much as I’d like to upgrade my phone, these new editions have prices that are incredibly steep and daunting. How am I supposed to get one of these? Sell a kidney? That’s a thought. Or I might as well consider Samsung’s Galaxy Note 8. At least I’d get it for half a kidney.

croaked by Bullfrog at 12:59 PM No comments: links to this post

Remember that secret jail cell in a Manila police station that illegally detained people for ransom last April? CHR discovered that. Remember that motion to bring back death penalty which somehow only favored the punishment of the underprivileged? CHR challenged that. There are several cases more, which should be enough to put into anyone’s minds how the CHR functions in this country.

Now, under the influence of Duterte, our government slashed the CHR’s budget to a puny P1,000 for an entire year not because they are not doing their jobs. They cut it down so abhorrently because they are doing their jobs really, really well. CHR is on the right track to discovering one of the biggest problems that continues making this nation sick. Whether you like it or not, CHR proved to be the light in the Duterte administration’s darkness.

When these congressmen are asked what their reasons are for voting yes to that decision, my world crumbled when I learn these people basically do not know the mandate of the Commission on Human Rights (CHR). They have no idea how the agency works. We are in the year 2017, and I guess everyone now is adept at stalking and Googling relevant information for fact-checking. A little effort goes a long way.

croaked by Bullfrog at 6:41 PM No comments: links to this post

August was such a busy month I could only wish I was at two or several places at once. Also, September. That explains the minimal posts in here lately, which is regrettable since there has been a lot to talk about last month, and that includes the first ever Pista Ng Pelikulang Pilipino in the Philippines. It aims to be a festival that precedes the much-maligned, money-centric festival that arrives in December. The less we talk about that trash the better. As much as I’d like to watch all of the PPP films, I only got to see five of them. And starting today, I’d share my thought about them, starting with this one.

What an odd, little film this is. Victor Villanueva’s “Patay Na Si Hesus”, one of the films screening for Pista Ng Pelikulang Pilipino, is a black comedy that strangely works even if it combines Tagalog and Bisaya humor. There are tones of “Little Miss Sunshine” and “Sideways” here, and I am not complaining. This is definitely road-trip movie—a genre not fully mined and realized in our country’s filmmaking circles and not appreciated by moviegoers—that features a family matriarch taking her children from Cebu to Dumaguete to attend the wake of her husband. It could have been as simple as that, if not for its strange family dynamics and scatterings of visual gags that are so hilarious, so out-there. I've never laughed so hard at the sight of Legos and a TV set until today (you should see them for yourselves). And that bathroom scene early on in the film, I find it so difficult to forget considering I once knew someone who believed that practice for a while. And Chai Fonacier is a delight; although her character borders on the absurd, her decisions and consequences feel real. It is far from perfect though. It definitely needs some judicious amount of script tightening, and the editing can sometimes feel like it is rushed. You’d also get a feeling that this mostly-Bisaya film is not written by a Bisaya at all. But its irreverence, boldness, and all of the actors’ willingness to dive headfirst into the absurd all make up for these, ultimately creating a movie that is charming and one that leaves you smiling even in these tough, dark times.


[ photo borrowed from this site ]

croaked by Bullfrog at 3:14 PM No comments: links to this post

In the Philippines, September usually heralds the special announcement of a select group of people who will be receiving some special recognition. This is the Carlos Palanca Memorial Awards for Literature, and as celebrated yesterday evening, at the Manila Peninsula Makati, it is on its 67th year.

And what a wonderful night of literature and like minds, especially to my friends who won! Shout out to Jesus and Glenn, and to my batch-mates in the Silliman Writers Workshop (47th batch, Katsubongs represent!)—Dustin, Noelle, Tokwa, and Igor! I was supposed to submit my manuscript but I forgot the deadline. Petty excuse, I know. Next time, I will make sure I have set my alarm. Here are the winners:

ESSAY
1st Prize: Michelle Josephine G. Rivera, In My Father's Kitchen
2nd Prize: Paul Gideon D. Lasco, The Art of "Hugot" in our Republic of "Sawi"
3rd Prize: Jade Mark B. Capiñanes, A Portrait of a Young Man as a Banak

croaked by Bullfrog at 11:47 PM No comments: links to this post