the magic lives on 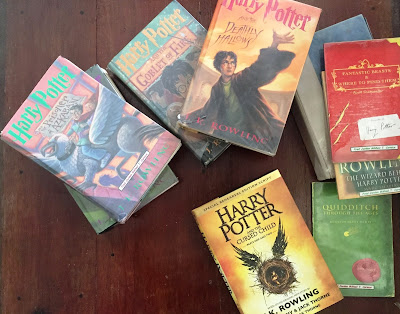 It was in late 1997, I was eight years old, and I was searching for the comics section in the Sunday papers, when I chanced upon a picture of a boy riding a broomstick and trying to catch this small winged golden ball. It looked absurd but it got me interested; I had never seen anything like it. I didn’t even know it was a review of a children’s book, and yet I immediately asked my sister if she could get me one as a Christmas gift. She agreed. And thus, several weeks later, I received Harry Potter and the Sorcerer’s Stone, the first book in a long long series.

I brought it to school, read it during breaks (and sometimes during classes). It was a time when everyone was free from the clutches of smartphones and the internet, so my classmates were suddenly curious about what was pulling my attention in when I was not talking to them. I told them about the book, told them about the story of an orphaned boy who turned out to be a wizard, and they were captivated. After I had finished the first book, I let my classmates borrow my newfound obsession. And then also the second book. And then the third. And then…

Thus, this was the beginning of a long-lasting relationship with Harry, Ron, and Hermione. With wands, spells, and the many forms of good and evil. And ultimately, with life, necessities, and love for literature in general. To read is to bring yourself to something new, to something magical. And to paraphrase a few words from the third book, “Anywhere is better than here.” And now, 19 years later, we are about to unfold a new chapter in the wizarding world.

This morning, after several days of following-up my pre-order at the nearest bookstore, the new story was released simultaneously worldwide, and I finally got Harry Potter and the Cursed Child in my hands. It was more special because it was released on Harry Potter’s birthday, July 31. There was a strange feeling brewing inside me. It had been a while. I was not sure if I am prepared to meet again someone, something I valued so dearly. So here I was, ecstatic to sniff the scent of a freshly unpacked book, to flip one page after another almost without end like I was eight all over again. I read the first chapter and, even at my age, it still felt right. Things do change, but the ones you love and treasure remain.

I believe this is how magic works.

croaked by Bullfrog at 10:44 PM No comments: links to this post

notes on a cardboard


Each day is a struggle. Which is why it worries me most that some people could say it’s a matter of choice to let things affect you. How selfish, how supremely naïve. We are humans, and we are gifted with empathy and understanding. Not being affected by what is happening to this country is almost like not living at all. This “cardboard justice” spreading like wildfire each day is just the beginning. When an accusation written on cardboards like “Addict at drug pusher ako. Wag tularan” gets stale and runs out of novelty, prepare yourselves for more of its variations…

It seems it is so easy to kill and get killed these days. No one is safe now. It is happening. And everyone has allowed this to happen. Blood is on our hands. And only time will tell you and I could be next.

croaked by Bullfrog at 12:42 PM 4 comments: links to this post

what will you become? So this is the story. It looks like being single is a crime. That’s why we have a luxurious hotel where we can find our potential partner. The only catch: You’ll transform into an animal (of your own choosing, at least) if you can’t find one in 45 days. The pressure is on, really. It’s as if the worst and most surreal of reality television are gathered together and taken a notch higher. The Greek director Yorgos Lanthimos’ “The Lobster” thankfully sustains this absurd premise until the end. It made me wish I knew his films prior to this. Collin Farrell is doing a Matthew McConaughey here; after a long absence in a major movie production, Farrell enters the first frame of the film as David with assuredness and the weight of his dilemma. You can see it on the slouch of his shoulder. He even has a beer belly to match the character’s seemingly baffled and expanding state of mind. (Also, this only me excites for his turn in David Yates’ “Fantastic Beasts and Where To Find Them” come November). And Rachel Weisz, even with the minimal dialogue, is stellar as usual. Although the story’s year is not stated and we can only assume it is happening many years from now, Weisz’s is the character on film that is closest to the thinking that we have right now in 2016, albeit heavily cynic. The film is painful to watch, too. No, it doesn’t have ghosts, screaming teenagers, and grotesque monsters in the form a giant lobster. It doesn’t have any of that trash. Instead, it is unsettling not only because of its dystopian setup but because the conditions of the story almost resemble our present-day relationships: the fleeting emotions, the blurring between love and necessity, the disconnect. In this day and age of dating and hookup apps, the need for mental health care, and now Pokémon Go, “The Lobster” provides us a glimpse of an open window which presents an un-reality that’s bound to happen soon. I guess it’s safe to say let’s start thinking now of our preferred animal transformations.

croaked by Bullfrog at 1:15 PM No comments: links to this post

Today is July 1, the beginning of the second half of the year. And looking back to the first six months, I’m left wondering, have I actually done enough in the first half? Have I accomplished anything that I can be proud of? Was it all worth it?

The road to this day was not entirely smooth and easy. I believe it will never be. There will always be that patron who talks loudly than the movie in a theater, that person who cuts the line to the cashier, those people who spread lies and think they can get away with them, those socialites who mistreat their server in a restaurant, those past loves that come knocking on your door without notice, and many more. Basically, those people in your life and around you who make living hard and miserable.

Just yesterday, in the early maneuverings of this new chapter in my life, I already feel like I’ve just endured three grueling years in one go, even if it has only been the second week. But still, for my 700th post in this blog—which I have started way, way back in August 26, 2006 (that’s almost 10 years ago!)—I’d like to say, come on over, July! Bring it on! After a long while, at least I can genuinely say now that, yes, it is all worth it.

croaked by Bullfrog at 10:50 PM No comments: links to this post