We are lighter than we think until we learn how to pick up some stones and pocket them.

croaked by Bullfrog at 9:46 AM 2 comments: links to this post

more powerful than ever 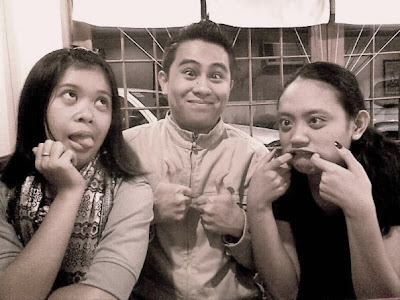 This comes a little late in the punctuality department but here it is anyway: yesterday was the second anniversary of BCF—born in Dumaguete City, now wreaking havoc across the nation. I will not give any further details behind the acronym, knowing the silly repercussions that may break the still waters of sanity by doing so, that is why I will end this note here with this overly misunderstood maxim: “Evil has a beautiful face.”

Sorry guys, it has been a long time since I go cryptic. Pardon the post.
croaked by Bullfrog at 12:55 PM 2 comments: links to this post

Before the drinking began, he took a loaf of unleavened bread and broke it into pieces. “Take this as a sign of my body,” he said, wrenching in pain. He had given up so much but the supper had just commenced. Enduring the fresh deep cuts that came with every piece he was giving to his followers, his humanness was eating him. But he knew the almighty would bless him, what with the sacrifice he had in mind. “This is for you,” he added, fervor glinting in his eyes.
croaked by Bullfrog at 7:56 AM No comments: links to this post

He knew it was the right time. He had planned this for a hundred sunsets. “Take this cup as a sign of my blood,” he said, handing to each of his men a few ounces of holy water that streams in his veins. “Do this in memory of me,” he pleads. And they drank from the cup. On the floor they dropped and in a blink they woke up to find themselves crucified on sycamore wood. They called out the name of their creator but heard no answer.
croaked by Bullfrog at 10:44 AM 3 comments: links to this post

The storm frightens the fishermen, the spray of sea salt desperate to reunite with the tears brimming in their eyes. "Be calm," a man says now awake, raising a hand. He steps out of the rocking boat and walks on water, just serene under the balls of his heels. He waves from a distance and allows himself to be swallowed by a giant fish. He leaves the people wailing, knowing that a sail without the fortitude of their despair has a boat that goes nowhere. A smile cracks on his face.
croaked by Bullfrog at 10:22 AM 1 comment: links to this post

In olden times, devout men worship their idols from morning until midnight, singing, reaching for their silken hems to feel how salvation runs smoothly in their fingers. And then at their faces they spit, cold and biting, searing the skin of the believers. This must be the reason why some are black, drifting into many shores like vessels of the night. They are burned at the stakes.
croaked by Bullfrog at 5:00 PM 2 comments: links to this post

how old are you?

An article by Sam Tanenhaus of The New York Times asks the question, “how old can a ‘young writer’ be?” The premise is interesting enough to set aside my morning tasks.

Going straight to the point of the article, the author implies, if not argues, that many writers produce and achieve great successes in their writing, which usually stays longer than any other works, when they are young (in the scope of fiction writing). That is why labeling them as “budding” or “promising” is not right; in fact they are at their peak.

Let’s take a trip back to history (taken in its entirety from the article) and see what this is all about:

‘Flaubert was 29 when he began writing “Madame Bovary” (and was 34 when it was completed).Thomas Mann was 24 when he completed his first masterpiece, “Buddenbrooks.” Tolstoy, after a period of dissolution followed by military service, began writing “War and Peace” at age 34. Joyce, who wrote “Ulysses” in his 30s, already had two major works behind him. The late-blooming Proust, his youth idled in Paris salons, was only 37 when he began writing “Remembrance of Things Past.” Even Kafka, the 20th century’s most haunting exemplar of anguished paralysis, was 29 when he wrote “The Metamorphosis” and 31 when he began “The Trial.”

Unsurprisingly, in youth-obsessed America, writers have often done their best work early. Melville was 32 when “Moby-Dick” was published (after the successes of “Typee” and “Omoo”). The writers of the lost generation found their voices when they were very young: Fitz gerald (28, “The Great Gatsby”), Hemingway (27, “The Sun Also Rises”). Faulkner lagged slightly behind. He had just turned 32 when “The Sound and the Fury” was published. Then again, it was his fourth novel.’

The celebrated post-World War II generation was just as precocious. Norman Mailer was only 25 when “The Naked and the Dead,” his classic, and enormous, war novel came out. And James Jones’s even longer work, “From Here to Eternity,” was published when he was 29. The indefatigable warhorses who grew up in the 1950s were also good very young: Joyce Carol Oates (31, “Them,” her fifth novel); Philip Roth (26, “Goodbye Columbus”); John Updike (28, “Rabbit, Run”); Thomas Pynchon (26, “V.”).’

A novel at the age of twenty-four (of which the writing starts at 22!)? Hands down. Even the writers of our own blood achieved overwhelming praises in their early 30s, worthy of argument or not, here and abroad. There’s Miguel Syjuco with his debut novel “Ilustrado,” grand winner of the Man Asian Literary Prize 2008. There’s Ian Rosales Casocot, a huge heap of literary merits under his belt. And many more.

The article just got me introspecting: What am I doing now? Sad to say, I am in a rut. I already have something grand in mind, yes, for fiction (none so far for my first love, poetry) but the disease of inevitably thinking of it is a long shot keeps me derailing from the “action,” forever stuck in the “plan.”

“Move on!” Rowena Tiempo-Torrevillas told me once in one of my many meta-musings. She is right. While the thoughts are still fresh in the head, young and malleable, move on and write on. This is the simplest route.
Then let’s discuss about our ages next.
croaked by Bullfrog at 10:33 AM 4 comments: links to this post

Email ThisBlogThis!Share to TwitterShare to FacebookShare to Pinterest
identities literature

unfinished ode to a cat

The cat
is no ball
of cotton,
it is a blithe
object of stealth,
a bullet
that hits
nine lives.
croaked by Bullfrog at 4:26 PM 5 comments: links to this post

For Silliman alumni out there planning for their latest trips back to the city of gentle people, Dumaguete, here is the 2010-2011 calendar of activities of Silliman University to guide and strategically mark the calendars with pins and x’s of getaways. Breathe in, breathe out, I wish I could do the same.

croaked by Bullfrog at 10:50 AM No comments: links to this post

He ambled alone in a trail and found his men asleep under the almond trees. “Wake up! Why can’t you even spend an hour with me?” the man asked, his robes as pale as his face. But before he received the words he wanted to hear, he felt the burden of his disciples’ own pronouncements and let them be. His feet brought him to a hilltop where he wept and confessed to his Father. He was struck by lightning.
croaked by Bullfrog at 3:51 PM 3 comments: links to this post

how sleep can be defined

I
Sleep? What is sleep but a still moment of escape,
a practice suspended in litmus clouds, or clouds
that could be cumulonimbus, or stratus in layers
levitating like sheets of linen above closed eyes,
where light could sift through their folds and head
to corners and creases and places night holds.

II
Sleep! The epilogue that the waking eye holds!
Defined by circles they create, those that escape
conventions of space, all forms of sleep head
to where they are contentedly in a blur: clouds.
This has a reason: dust, street and spires tire the eyes,
Glass buildings split and slice the body in thin layers.

III
Does one really need mirrors to face layers
upon layers of one’s self, wherein one hand holds
the multiplicity of sameness, gripping the eyes
with images so grand no marvel could escape
before sleep arrives? No, what are needed are clouds:
Real but invisible to touch, like thoughts in the head.

IV
Some say sleep does not appoint dream as the head,
the principal in every meditation, since it layers
itself with plausible elucidations on living, it clouds
logic, lifebuoy of occasional foolishness. Yes, it holds
some truth: dreams give the wrong reason to escape,
they trick people not to look with their own eyes.

V
Query: Why trouble on things not seen with the eyes?
Response: Answers are buried beneath the head.
Query: But why trouble on intricate plans of escape
to dreamscapes when in fact truth lies in layers
of falsehood, in patterns? Response: the sleeper holds
too much weight he wishes to rest on the ninth set of clouds.

VI
Sleep comes not only at night; it heralds the clouds
as day visits, like one morning a man sees them, eyes
them skimming the sun over skylines, in bed that holds
him, cradles him in the next hours ,where his head
rests on layers of blanket, of blankets in layers.
He closes his eyes, defines sleep, there is no escape.

VII
Nothing holds certainty as beautifully as sleep, to escape
With eyes closed in peace, not just to see between the layers
Of random thoughts where clouds set sail and head.
croaked by Bullfrog at 8:35 AM 5 comments: links to this post

Names are not found

Names are not found
underneath the stones
but within them,
trapped in cages
used to their ignorance.
If my hands hold the skill,
I will dip my fingers
through the surface
of the stone and pluck
the name carefully
from its core, pocket it
and throw the stone
to a nearby river,
see it skip three times
away from my name.
croaked by Bullfrog at 8:12 AM 1 comment: links to this post

There is nothing left to think about

since everything has been printed
broadcasted forwarded relayed
heard side by side chats gossips
phone messages conversations
over bottles of beer cups of coffee
in uptight steel and wooden cafés
there is nothing left to think about
since there is no time to pause and
think since the right time doesn’t exist
no wonder no one knows the news
croaked by Bullfrog at 1:14 PM 5 comments: links to this post