Last Sunday at church, during the evening worship service, I was a bit disappointed with the pastor’s sermon that I felt my heart drop into the pits of my stomach. The pastor kept referencing to Rodrigo Duterte’s methods, especially his so-called War on Drugs, as a way to achieve peace. There are many brilliant ways and references to discuss peace, and I think he should have thought of a better analogy. As I was listening to him, I wanted to grab him and tell him, “Pastor, that’s why it’s called a war! It has never been peaceful! It always results to unnecessary pain and bloodshed!”

Of course I couldn’t do that. So I remained on my seat and dismissed the thought of not sitting through the entirety of the sermon. But then there was his slight condemnation of celebrity Agot Isidro for her famous remark on the President’s insistence to end foreign aid to the Philippines. Isidro said on her social media account, “Ayaw naming magutom. Mag-isa ka nalang… You are not a bipolar. You are a psychopath.” The pastor went on criticizing her for that because, he said, she doesn’t think carefully about the implications and severity of her words. That Agot Isidro is downright insensitive. Excuse me, pastor, but have you actually heard any of the words that came out of our President’s mouth recently and in the past? Remember that rape remark, pastor? Pu**** i** diba, pastor? Bang diba?

This pastor then added that the Philippines really do not need any help from the U.S. or any foreign nation because we have our own rich resources, and that we should show to the world how we can sustain on our own. That’s another problematic statement for another post. I couldn’t believe I was hearing this inside a church. I wanted to ask him again, “Pastor, have you heard that Duterte is actually rubbing elbows China and Russia, two examples of a foreign nation?”

I thought this was the end of it, but he continued rallying for peace, that it could only be achieved by measures as drastic and sinister as Duterte’s. It was as if he suggested that drugs are indeed the sole root of all evil in this country. But what about mis-education, what about poverty, what about the rising lies, hate, pride, and intolerance advocated by our current president, the very anti-thesis to peace? It all left me thinking: did this pastor just support the idea of extra-judicial killings? Did he just imply that those thousands of deaths are okay and justifiable?

There was a lot of contradiction in his sermon’s message that I was left confused, my head spinning in all directions. It was like witnessing firsthand a brainwashing propaganda. I know each of us in that congregation has a personal political inclination, but I personally believe this pastor should’ve kept this inclination outside the church. Because the church should teach compassion, not confusion. The church should encourage love, not hate. This pastor must have forgotten about the separation between the state and the church.

Pretty long, right? I would’ve laughed so hard on this rabid Duterte supporter’s comment if it was funny and witty, but unfortunately, it was not. It was flat and all noise. Just look at those exclamation points. Like many of his kind, this Duterte supporter once again missed the point. So I told him that he missed my point, and that there is no need to bring out the thought police. Why? Because we are already imprisoned by the thought that these rising number of deaths are okay.

This is not the first time I am accused of being intolerable, but for cases and causes such as this, yes, I will gladly remain intolerable. But truly, I am saddened. Because when a religious denomination suddenly sides a political ideal, whether it is Catholic or not, I think that church limits itself to only seeing things in black and white. No grey areas. And when a church somehow implies that killing is necessary to achieve peace, I think this church is not peaceful at its core.

After the service, as I left the church that evening, I felt something heavy inside me that was painful as heartbreak. For the first time in a long while, I felt betrayed by someone, something so important to me. 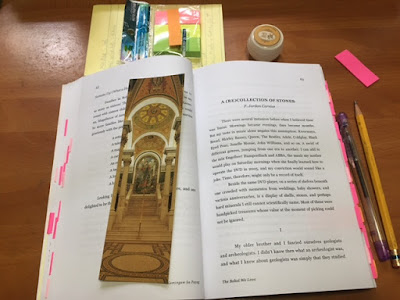 Last Saturday morning, October 15, at around 8AM, my mother told me that sirens wailed and bells rang all over the city in Bohol, breaking the stillness that usually welcome the weekends in the province. I wondered why. And then I realized these served as a remembrance of an event in 2013. October 15 was the day Bohol was struck by a 7.2 magnitude earthquake at around 8:12 in the morning three years ago. It was a massive heartbreaking period of loss and devastation. Fast forward to this day, Bohol and its people have not forgotten but have carried on, returning to a normalcy that is communally worked on through the years. Padayon lang.

That is why I find it so timely I’ve just recently received a snapshot of my essay titled "A (Re)Collection of Stones" in proofread print, which would soon appear in the anthology The Bohol We Love, a book edited by an award-winning, talented Boholana Ms. Marjorie Evasco, and to be published by Anvil. In a few days, this proofread copy will be sent to the printers. In here, I’ve dedicated a section of my non-fiction work to a story about the earthquake’s aftermath in Loon, one of the hardest hit towns. Seeing this photo and seeing the stunning day outside the window at the same time make my heart swell with joy. I cannot wait for the book launching on December. It’s just one of those few things to look forward to in these dire times.

croaked by Bullfrog at 8:29 AM No comments: links to this post