what is wrong with us?

Along the road, early morning three days ago, as I went about my usual route, I suddenly felt a massive pain in my arm. It turned out a car just sped right beside me and hit my side. I saw the driver jerk his head towards my direction. I thought he’d stop, but he just faced the road again and sped away into the distance. Things happened in a blur, I was not able to get the car’s plate number (it looked like an old-model, blue mini-compact crossover). It stunned me for a moment. I looked to my other side and felt lucky I didn’t fall into a five-foot high ditch.

The hit and run incident left some evidence though. Across me are pieces of the car’s shattered window visor. I didn’t know my arm was that tough, capable of breaking an industrially manufactured plastic, but this fact only showed how fast and reckless the man was driving. And he just left. Not a concern, not even an apology.

Now this begs the question: What have we become as humans and being humane? What happened to decency? What is wrong with admitting to a mistake you’ve done, telling the truth, and saying you’re sorry? It seems being rude is the new norm, as if to harm is as ordinary as taking a bath. I guess we have broken ourselves too much we‘ve now reached the point of being irreparably numb.

Today, out of a miracle I still have to comprehend, I am only nursing a large bruise the shape of my home province and a scratch that almost encircled my arm. Still, it saddens me not because it looks like someone’s trying to stop me from having my Valentine tomorrow. It’s just that humanity failed as early as 7AM.

I arrived in the theater with the lowest of expectations, but “Jupiter Ascending,” the latest film by the Wachowskis who also brought to us the groundbreaking “The Matrix Trilogy” many years back, turned over its head and was entertaining through and through. And to think that this is not a sequel of any franchise, not based on a comic book or a young adult novel makes it a bold piece of cinema. To make it clear for everyone: It is original. That alone makes every cent for a ticket worth it.

Despite the pastiche of references (a sample was an excellent scene that dives straight into Terry Gilliam territory), the pieces fit well together. For some who knows only a thing or two about pop culture bits from around the world will be scratching their heads though. And there was one big red herring that, I believe, disappointed a lot of critics and resulted to the film’s almost unanimous and overwhelming bad reviews. Don’t believe them. I think they’ve seen an entirely different movie. It was fun, and that’s what matters, right?

croaked by Bullfrog at 9:38 PM No comments: links to this post

Attention, new writers: The Department of English and Comparative Literature of the University of the Philippines in Diliman is calling for submissions to New Voices, a two-volume anthology of poetry and fiction by new Filipino authors writing in English. To be published by the UP Press and possibly in cooperation with the Commission on Higher Education, these volumes will provide a platform for new writers to gain literary renown, as well as contemporize teaching materials for Philippine literature in English.

Current anthologies of Philippine poetry and fiction are edited and dominated by well-established writers who form the local literary canon. This practice makes breaking through the publishing and literary worlds difficult for newer authors, many of whom have only published individual poems or stories in magazines and journals. The New Voices anthologies seek to draw attention to a new generation of Philippine writers by filling a gap between the authors’ publication of individual poems or stories in periodicals, and the publication of their first book.

New Voices will feature approximately 15 poets and 10 fiction writers. The selection process will begin immediately after the deadline and end by May 2015. Authors of accepted manuscripts will be notified as soon as the selection process is completed.

The submission guidelines are as follows:

For inquiries and submissions, contact the editors at newvoicespoetry2015@gmail.com or newvoicesfiction2015@gmail.com. Please specify ‘inquiry’ or ‘submission’ in the subject line.

[ info and image lifted from this site ]

croaked by Bullfrog at 9:16 PM No comments: links to this post

Contributions of poems about nature, species, disasters, environmental justice, and our interrelations with these are now welcome in an anthology of Philippine eco-poetry entitled “Sustaining the Archipelago.”

The importance of compiling our experiences with our ecosystem is evident in what we see around us: our country is one of the 17 megadiverse nations in the world and as such, we live in extreme biodiversity. We are even called, to quote from the 1997 publication entitled “Megadiversity,” one of the earth’s “biologically wealthiest nations.” Yet, those labels are in sharp contrast to our reality of being a “Third World” nation. Using the terminology “megadiversity” to describe any country is appealing, yet it also opens an onslaught of problems which even the Areas of Biodiversity Importance recognize: they say that the nations who are biologically richest are also the nations whose ecosystems are under severe threat. The 2014 Environmental Policy Index confirms this, since the Philippines only ranks 114 out of the 178 environmentally-healthy nations. For one such megadiverse nation, this is an alarming discrepant and an indicator of misaligned values, policies, beliefs, practices, and an overall issue with the utilization of natural resources. It is in the ruthless destruction and degradation of our archipelago that the ecological consciousness of society must be permeated by any means possible – especially through poetry.

What is Ecopoetry?
Ecopoetry has been defined as a poem which investigates both thematically and formally the relationship among language, nature, culture, and human perception of these. It is also widely accepted as a poem which offers a view of the world; an understanding of the nonhuman environment; joy and experimentation with and among nature; and most importantly, an acknowledgment of the responsibility affiliated with writing about the environment. Thus, an ecopoem must not only show the relationship among local language, nature, culture, and human perception, but also investigate the possibilities of offering a view of the environment, an interrelationship with and among species, and the writer’s burden of responsibility in transcribing the natural.

The Future of Ecopoetry in Sustaining the Archipelago
This project of compiling ecopoems which speak of our ecological interrelationship is to hopefully prove that there is power in language – a power which can effectively show the picture of our lives to awaken our senses, connect us with ourselves and others, and lead us to think in radical ways.

There is a possibility that if we acknowledge the poetic beauty, its force, and capacity to reach out to all of us, we may be given the chance to recognize our responsibilities in maintaining the delicate balance of our ecosystem. In turn, it will allow us to lighten our footprints in our archipelago and in the world. And because poetry speaks personally, its message is delivered quickly, clearly, emotionally, effectively. This anthology may broaden the possibilities of coming up with sustainable solutions to the ongoing environmental crises - a clear and practical way for Filipino writers and their literariness to contribute to the fight against climate change.

Submission Guidelines
Please email your original and published or unpublished ecopoems to the editor, Rina Garcia Chua (rinagarciachua@gmail.com), with the subject heading: Sustaining the Archipelago Submission.

You may send multiple poems or a collection of poems, but it may not exceed more than 10 pages and must be in a Microsoft Word Document file (.doc or .docx). Ecopoems in Filipino and other languages are more than welcome and must be accompanied by an English translation. If your ecopoem has been published elsewhere, please include a bibliography entry of its previous publication at the end of the poem. If it has been simultaneously accepted in another publication, please notify the editor immediately.

Also, follow the filename of your document file/submission as such: lastnamefirstname_titleofcollection titleofpoem.docx (e.g. RotorAbercio_PoemsinTranquility.doc). You can email your essay as a file attachment and include a brief bio-note of 100 to 200 words, institutional affiliation, contact number/s, and email address.

There are a number of confirmed contributors, as well as a foreword from Dr. Greg Garrard, the author of the books Ecocriticism (The New Critical Idiom) and The Oxford Handbook of Ecocriticism. There are also international and local publishers who have shown interest in the anthology. If you have any questions, please do not hesitate to contact the editor via the given email address.

croaked by Bullfrog at 9:07 PM No comments: links to this post

It is no secret our government always fails us like a serial heartbreaker. It doesn’t help that it is mostly run by people who are better off as jesters in the court. Laughable is an understatement.

There’s our Senator Vicente Sotto III who once again quotes the words of our recent celebrity visitor Pope Francis and takes them out of context in a whole new level, inserting his agenda on the opposition of the Reproductive Health Law.

There’s congressman Manny Pacquaio who, once questioned why he isn’t constructing or passing any law during his term—especially that his attendance in the House of Representatives can only be summed up to seven out of 70 sessions—responded that, “Huwag niyo na ako iboto. Mas gusto nga matalo nalang ako. (Just don’t vote for me anymore. Anyway I prefer to lose).”

There’s Joseph Ejercito Estrada who, after being deposed as the nation’s president by a People Power movement because of plunder, ironically returns to power in the form a mayoral seat in the city of Manila, grinning and waving to the deafening cheers of his fans.

And finally, to rub salt in a wound, there’s our current president Benigno “Noynoy” Aquino III who attends the inauguration of a car manufacturing plant instead of the necrological services of the remains of 44 elite policemen who died in a terrifying onslaught in Maguindanao last January, as if he has forgotten his role as the nation’s commander-in-chief.

These are but a few sampling of diseases that plagued the country. A man who is delusional, a man whose fame has gotten into his head, a man who continues to get away, and a man whose priorities have gone bonkers. Even with these facts, facts that are more visible and present than ever, it is sad to note that people continue to put them in power.

The poet Charles Bukowski once said, “The problem with the world is that the intelligent people are full of doubts, while the stupid ones are full of confidence.” Laugh all you want, but it struck a chord. Perhaps the people do not understand the meaning of “plunder,” or what a contraceptive is, or maybe ignorance, and that primetime news have not done enough explaining on what these things are? Questions, questions.

It looks like the majority of the Philippines can be diagnosed having the Battered Wife Syndrome. And we do not deserve this. We cannot just be full of doubts, groan, and complain throughout the rest of our lives. This cycle could only be stopped if we face the reality and decide to ease our problems long-term and not only for the time being.

Because if we allow ourselves and this nation to be better, then we can really be men and women of intelligence with the right amount of doubt.

Guys, it’s February. It’s that month of the year that could rival December’s jam-packed restaurants and malls. And just like any old map, X marks the spot. Kaya mag-ingat. 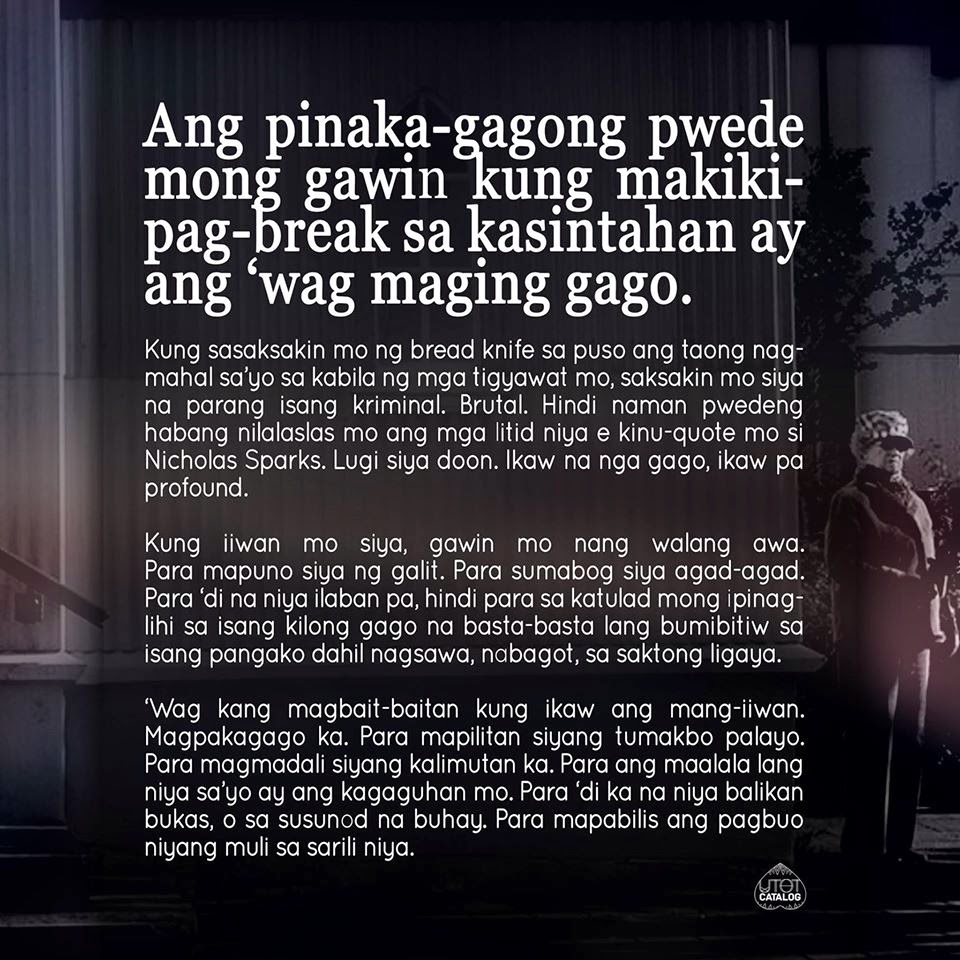 croaked by Bullfrog at 9:37 PM No comments: links to this post