poetry as a lesson in botany

We have grown fond of these:
Lifting the dry bark off a trunk,
Being forlorn as flowers in the rain.

But let’s keep in mind the evenness
Of the latter’s blooming wounds
Like Earth’s fragile mouths in chorus.

See, we are in mute obedience to life
When this patch of grass pushes
Through the pores of our clothes.

Rarely do we ever hear
The safeties of a mushroom.
We only have consequences,

Since nobody would root for pain
The way things endure
In the last tundra of the century.

Nobody would ever tell us, too,
Of the dandelion seed in wanderlust,
Of the alga deprived of its place.

We just need to know because
Aren’t we always in search of trees?
Knowledge, life, family.

Branches reaching for next
To nothing but conviction:
This word, this light, this touch.

This fruit that could be poison.
Here’s a grain of rice fresh
From its husk. Look at it closely.

Look at how finite, how inept it is
In its solitude and crudeness.
Look at what we have done.
croaked by Bullfrog at 11:18 AM 2 comments: links to this post

the biggest circle of friends, a history 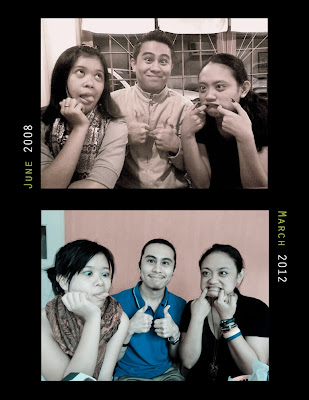 In the early days of college, somewhere in the middle of 2006’s second quarter, we seemed to gravitate to people who were a year ahead of us (some way older). It could be the humor beyond our age that they had, the no-nonsense quality they possessed, the campus tricks-of-the-trade they knew as if these were the back of their hands. So when time came they had to go, finally graduating (some after five, six or so years), we felt a massive chunk of our social lives chipping off. Even those in the university paper (where we spent/wasted a couple of our hours) who we thought would linger longer, if not forever, had packed up. Cue Beethoven’s “Moonlight Sonata.”

And there we were, left to each other. Still in the university paper, juniors this time in 2008, it was our turn to let in new applicants for the recently vacated staff slots. We met odd, giddy, idealistic, gullible, and especially younger girls and boys. It seemed the world they lived in was leagues away from ours. They were fine, but something felt stilted. Out of gratuitous infantilism, the three of us then decided there were no better companions than ourselves.

There may only be three of us but our tandem was larger than life, indestructible, powerful. We stuck together like evil stepsisters. We were the Biggest Circle of Friends. BCF. (Yes, we were naive and self-absorbed that way. Bwa-ha-ha).

But in irony’s twisted hands, we co-wrote this feature article for the first issue of the paper that made us think back to our former selves. Odd, giddy, idealistic, gullible, and most especially younger. “The Five Enemies You Meet in College.” It was a guide of college archetypes for freshies to be wary of. Then it dawned on us we three could be Enemy #5. We were turning into people who we would loathe when we were wide-eyed, free birds a few years back. We simply laughed it off, all for satirical ha-ha, but we knew it struck a chord. Cue Beethoven’s “Allegro Con Brio.”

So we changed, in the purest deus ex machina kind of way. Everything was fine. We realized the newbies we met, especially those in the publication staff, night after postmortem night (the evening meeting we call for reviewing the just-released paper) were as neurotic as us. And in today’s parlance, it deserved a  “Like.”

The three of us kept the circle.  We were still the Biggest Circle of Friends, and today’s our fourth year anniversary. Why? Well, it was just the day we wrote the aforementioned article, with “Biggest Circle of Friends” turning up as the feature’s byline in hundreds of papers circulated all over the university (and perhaps all over Negros Oriental) four days later. We just deemed it was worth remembering.

These days, we don’t get to see each other as much as before, but to hell with drama. There’s Facebook and there’s Twitter. One’s now reviewing for her bar examination, one’s a manager of an events agency, and me, well, oh look, a kitten! Grab that cute, little kitten!

croaked by Bullfrog at 2:54 PM 2 comments: links to this post

A flash fiction of mine, “Where The Cats Are Always Sleepy,” will be published in the Asuang Issue of Paper Monster Press (along with one of my favorite poets Joel and artist Arbeen a.k.a. Tilde). This would be my first attempt at this genre, so I find this remarkable news. (Big thanks to Eva, really). I thought nothing would surprise me this June.
Lifted from their Facebook page, here is the (incomplete) list of contributors of the seventh edition of Paper Monster Press:

croaked by Bullfrog at 9:45 AM No comments: links to this post

I just have to post this. It made my day.

[ lifted from this site ]
croaked by Bullfrog at 12:43 PM No comments: links to this post

poetry as a lesson in history

The names, the dates,
The traces of vanillin
Leaching from old libraries,
We forgive them
For their obsessive nature.
We know history
Is a plea for permanence.
Sometimes an appeal
For relief, since what is familiar
Can never be too obvious,
Else we terribly fail
Our memory’s cunning.
Though this instant
We know of as now
Changes tomorrow,
There is no such thing
As forgetfulness.
There is only color
And the myth
Of its absence in dreams.
We belong to the past
We recognize, to the present
We forge with care
And ignorance. Always,
This one is for the books.
croaked by Bullfrog at 3:43 PM No comments: links to this post